A challenging period for EM equities

The recent past has been very challenging for EM equities, with the MSCI EM Index having lost 20.1% in the one-year period ending April 29 compared to a loss of 1.2% for the MSCI World Index of DM equities. EM’s underperformance reflects a number of factors, most notably China’s homemade bear market based on a property market credit crunch, wide-ranging regulatory clampdowns, and rolling Covid lockdowns. Those factors contributed to a 37.1% decline over the past year in the MSCI China Index, which accounts for nearly one third of the overall MSCI EM Index.
Aside from the China factor, the MSCI EM Index excluding China was down by 7.2% over the same period. Russia’s war was a key factor, since that nation’s equities represented 3.6% of the MSCI EM Index at the end of 2021 but were effectively written down to zero in the EM benchmark as of March 9. In addition, a spree of EM central bank rate hikes in response to rising inflation also created valuation headwinds, with the 12-month forward price/earnings (PE) ratio of MSCI EM excluding China falling to 12.0 times at the end of April from 13.7 times one year earlier. Earnings trends were not a headwind for EM markets outside of China. For example, the 12-month forward estimate for earnings per share (EPS) for MSCI EM excluding China rose by 6.0% in April from a year earlier. Moreover, the gain would have been roughly 10% higher absent the Russia factor.
Against the backdrop of such extraordinary cross currents, it may be useful to take a step back and look at overall valuation comparisons between EM equities and those of the S&P 500 Index. What is notable is that EM equity valuations have corrected significantly from their year-earlier levels. In contrast, despite the recent U.S. equity market correction, valuation measures for the S&P 500 remain quite elevated relative to their long-term ranges. This means that on a relative valuation basis, EM equities have rarely been this cheap versus U.S. equities. Historically that has been associated with significant outperformance of EM equities over the next five years. Of course, it will take a resumption of solid EM growth in coming years to assure that EM equities do not remain a “value trap.”

A simple illustration of relative equity valuations can be seen in the price-to-sales ratios of the S&P 500 Index and the MSCI EM Index. Those ratios traded respectively at 2.6 and 1.3 times as of the end of April (Chart 1). In other words, by this very simple metric, EM equities are trading at half the valuation of U.S. equities. 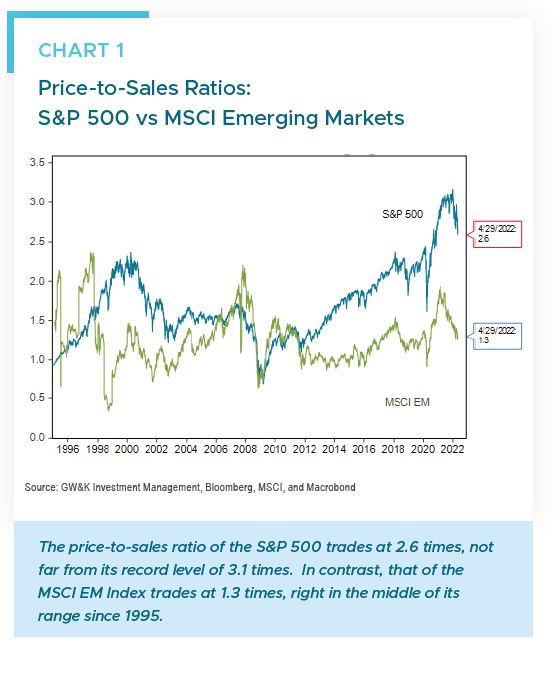 Note also that, relative to their own history, EM equities look fairly valued by this measure since they trade close to the middle of their price-to-sales valuation range since 1995 (60th percentile). In contrast, despite the relatively modest correction in U.S. equities so far this year, the S&P 500 Index continues to trade near the upper end of its historic price-to-sales valuation range since 1995 (95th percentile).

Now consider the historical trend in the relative valuation of EM versus S&P 500 equities, using the gap in price-to-sales ratios as a key measure. The current spread of -1.3 points (1.3 minus 2.6) puts EM’s relative valuation versus the S&P 500 near the very bottom of its historic range since 1995 (Chart 2). Indeed, on this simple valuation comparison, EM equities have only been relatively cheaper than the S&P 500 5% of the time since 1995. 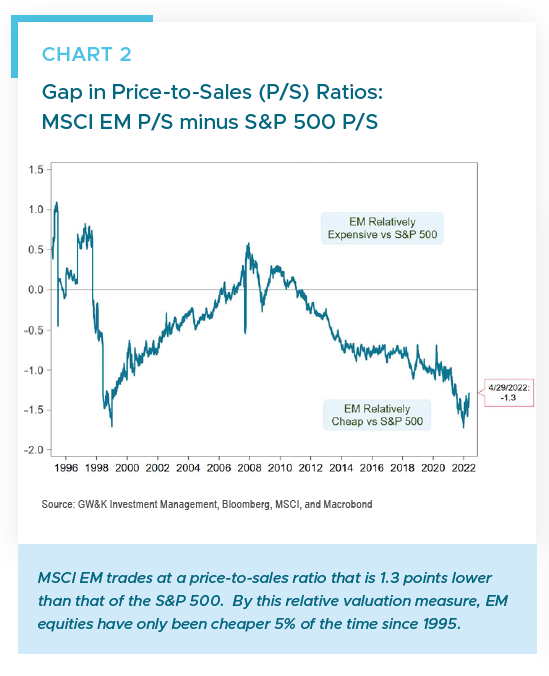 Using monthly data, we performed a similar analysis on a wide range of equity valuation measures going back to 1995 and got similar results. The measures we considered were: 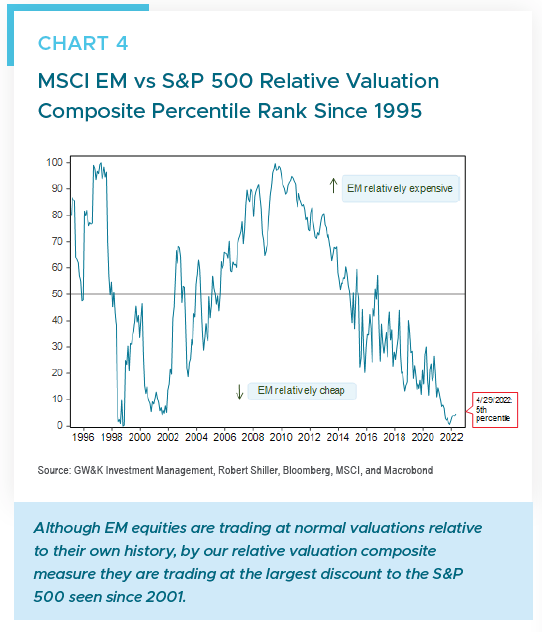 Such comparisons come with caveats. For example, the S&P 500 Index has a notably higher weight than the MSCI EM Index in Growth sectors like Information Technology (28% vs 22%) and Health Care (14% vs 4%). Such sectors tend to have higher profit margins that support higher equity valuations than those found in Value sectors like Energy and Financials. So differences in sector composition across time between the S&P 500 and the MSCI EM Index may distort index-level valuation comparisons to some extent. Differences in country weights may also affect the comparisons, since China’s weight in the MSCI EM Index has grown substantially over the past ten years from about 17% to 30%.

Another important caveat is that valuation measures usually have close to zero correlation with short-term returns over one- or two-year periods. However, they tend to be more informative over longer-term periods of three to five years. That means they can be helpful to long-term investors and asset allocators, even if they offer little guidance to short-term traders.

Based on quarterly data since 1995, our composite measure of EM vs S&P 500 relative valuation does appear to have given useful signals. Consider the gap between five-year annualized returns for the MSCI EM Index versus the S&P 500 Index. Historically, when EM initially traded at a significant discount, the MSCI EM Index subsequently tended to outperform the S&P 500 by a wide margin over the next five years (Table 1). The opposite was the case when EM initially traded at a premium to the S&P 500. 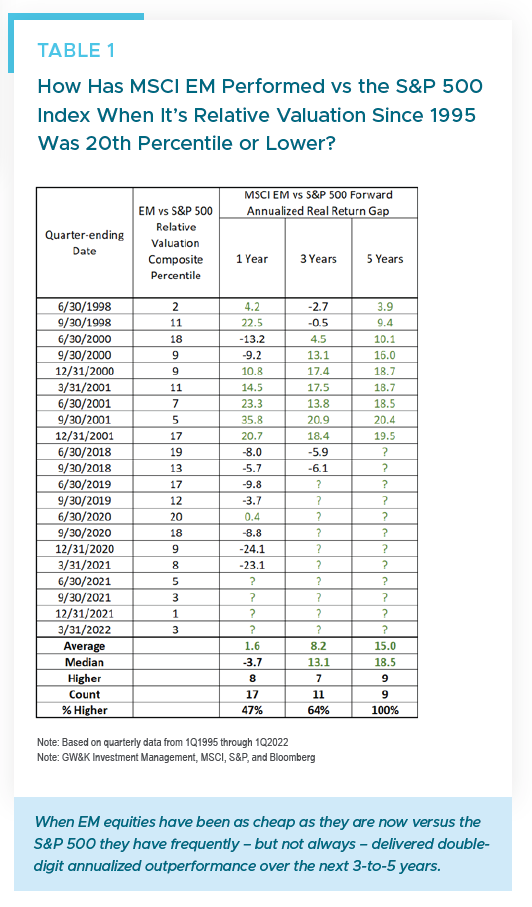 Although EM economies face near-term challenges as central banks fight inflation pressures and China’s Covid lockdowns continue, it seems likely that EM economic growth will outperform U.S. growth on a three- to five-year view. Indeed, the recent World Economic Outlook by the International Monetary Fund projects trend growth rates in 2027 for the EM economies of 4.4% compared to only 1.6% for the DM Economies and 1.7% for the U.S.

In short, despite near-term headwinds, the potential for EM equities to deliver long-term outperformance versus U.S. equities has rarely been more compelling based on relative valuations.

Combined with prospects for a resumption of stronger EM growth in coming years, EM equities should continue to represent a useful complement to U.S. equity holdings. Nuno Fernandes, CFA was quoted in a Bloomberg article, entitled, “Some Funds Refuse to Give Up on China’s Stocks as World Flees.”